About the P20 Pro

The biggest company you might not have heard about?

Huawei, is a relatively recent name in the smartphone handset world, at least as a premium player, challenging the likes of Apple, Samsung and Sony. You may be surprised to hear that in handset volume terms Huawei has already overtaken Apple and is second only to Samsung. Huawei is one of the biggest companies you may never have heard of. It’s a massive multi-billion dollar developer and global supplier of telco network infrastructure equipment. It’s a Fortune 500 company and was only created by an engineer in China as recently as 1987.

The P20 Pro is Huawei’s flagship smartphone. It’s not an anonymous me-too design assembled from off-the-shelf components. Huawei designed its own cutting-edge Kirin 970 chip-set to optimise power consumption, maximise CPU power with its 8-core layout, and to incorporate a neural processing unit to power yje P20 Pro’s AI features. The P20 Pro has 6GB of RAM, more than almost all its competitors.

Leica was brought in to ensure the camera optics were leading edge, too. Dual rear cameras are now commonplace, even starting to appear in some budget handsets. Huawei wasn’t stopping at two, however. The P20 Pro has three.

Why three cameras? The main camera has a 27mm-equivalent wide-angle general-purpose lens and a 40 megapixel colour sensor. A key innovation is the use of an unusual quad-bayer colour filter enabling image data to be processed in real time to form a higher quality lower resolution result. The 40 megapixel sensor delivers an optimised 10 megapixel image. 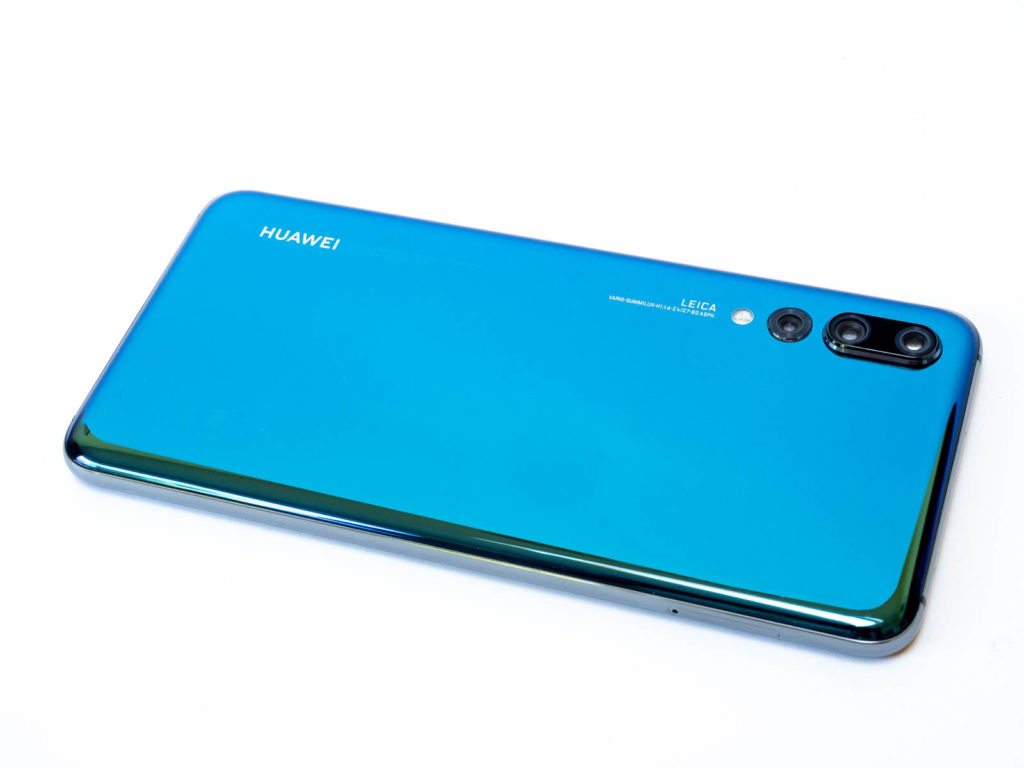 The use of an over-sized sensor with a huge number of pixels and then combining pixels to make a high quality lower resolution image may sound familiar; it’s what Nokia pioneered with its acclaimed Pureview technology. Huawei have clearly been inspire by this. But with Nokia’s demise in the wake of their take-over as part of Microsoft’s failed smartphone venture, Pureview development ceased. Huawei have taken the Pureview idea and taken it to the next level with the P20 Pro.

The P20 Pro employs no less than three methods of automatic focusing. These are contrast detection, SLR-style phase detection, plus laser focusing.

If the scene is reasonably still the P20 Pro can also automatically use data from multiple images to enhance sharpening, dynamic range and noise control. 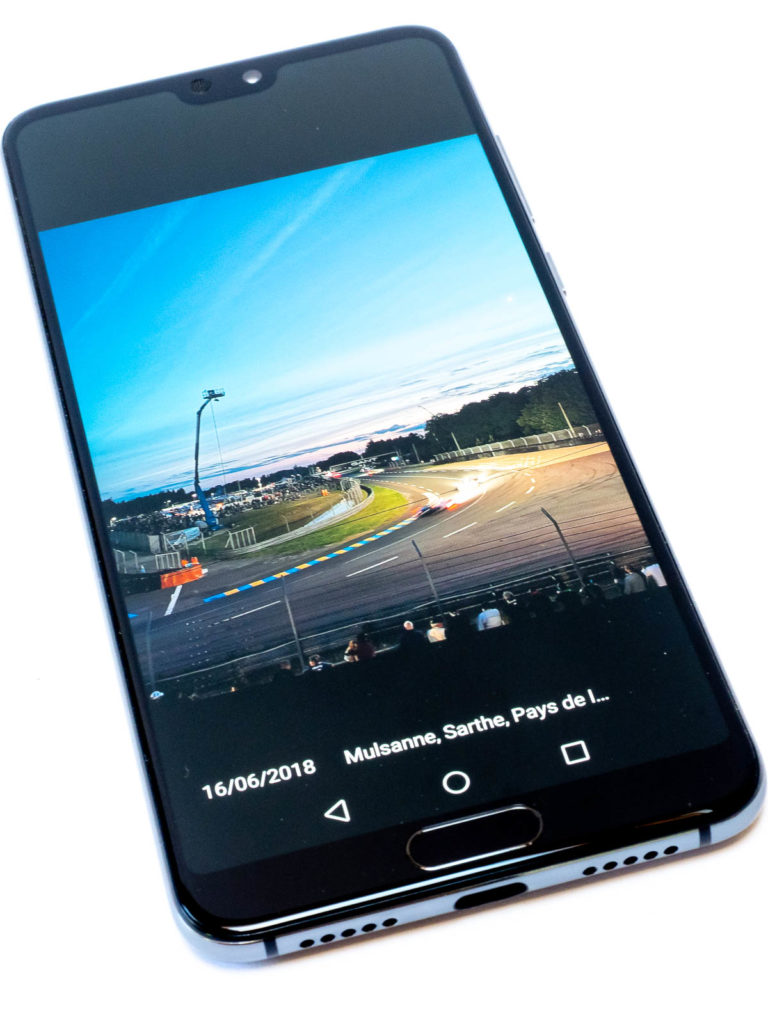 If you prefer to do your own post-processing, the P20 Pro shoots industry-standard DNG RAW files in Pro mode. Digital zooming isn’t available in this mode.

It goes without saying there are HDR, panorama stitching, macro, document scanning and straightening, time-lapse recording, plus other modes. Even the wide-angle front-facing selfie camera offers a class-leading 24 megapixel sensor, plus variable ‘beauty’ adjustment, bokeh blur option and a ‘3D’ artificial lighting mode.

The 6.1 inch 1080 x 2240 pixels (408ppi) AMOLED screen is of the trendy edge-to edge ‘notch’ type, though the cut-out is relatively small. There is an ultra responsive and reliable fingerprint scanner at the base of the front. I personally like it there but I know plenty prefer the increasingly popular location on the back.

There is no heart rate sensor or wireless charging. Fast charging requires a power source compatible with Huawei’s own Supercharge protocal rather than the more ubiquitous Qualcomm Quick Charge system.

There is no headphone socket, though a USB adapter is included but of course you can’t charge your phone while listening on wired headphones. Fortunately, the P20 Pro has a whopping 4000mAh battery, a third larger in capacity than usual. The Kirin chip-set is frugal on power, too and with normal usage I can get around two days life between recharges.

While the back of the P20 is beautifully finished pearlescent-effect glass, it’s really slippery. I found the phone moving by itself, headed for the floor, too often and quickly invested in the excellent Huawei Smart Case. The P20 Pro is, however, protected from immersion in shallow water for short periods, which is reassuring.

Although there is no microSD card slot, 128GB onboard storage is standard. With 6GB of RAM and the powerful 8-core processor in the Kirin chipset the P20 Pro is impressively lag-free. Don’t let unspectacular synthetic benchmark scores put you off; the P20 Pro is very swift and maintains that performance even when lots of apps are open, thanks to the generous amount of RAM.

You get a USB-C port but it doesn’t appear to be a fast USB 3 type. Stereo speakers at the base, either side of the USB port. Pump out decent sound.

How about three P20 Pro cameras?

The clever people over at DxOMark rated the P20 Pro as the best smartphone camera yet and by quite a margin. I have no reason to question that conclusion.

Images produced by theP20 Pro are sharp, punchy and mostly free of the usual issues that plague smartphones, like burned-out highlights and blocked-out shadows. Low light sharpness and noise control are remarkable for a smartphone.

The P20 Pro’s AI can occasionally out-smart itself

However, there are some less-desirable traits that you need to keep an eye on. The AI-driven auto scene evaluation system is often a boon, but sometimes it can read things wrongly. I occasionally found extra bokeh blur added when I didn’t want it, colour and tone sometimes became over-cooked as if HDR was applied unnecessarily. The zoom operation requires tapping a small button in the screen or pinch-zooming. I’d like to have an option for a simple slider and a warning when you’ve exceeded the lossless zoom range.

But these issues are far outweighed by the sheer ability of the P20 Pro. This is the first phone that I have been able to photograph low-flying birds in flight. I wasn’t that optimistic the P20 Pro would be any good panning Le Mans sportscars in fading light, but it redeemed itself admirably. Only distorted verticals, caused by the CMOS sensors and absence of a mechanical shutter, blotted the P20 Pro’s copybook but none of its competitors would have escaped this issue.

The P20 Pro is great fun to use as a camera, it’s also a stylish and fast phone. It’s the most accomplished smartphone image maker and deserves to be a favourite with photographers.

Follow
wpDiscuz
We use cookies to ensure that we give you the best experience on our website. If you continue to use this site we will assume that you are happy with it.OkPrivacy policy